Written on 15 September 2020. Posted in Multimedia. 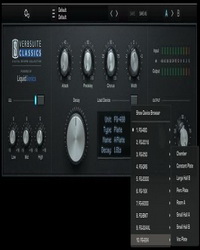 Reverb is perhaps the most fundamental effect in audio production. Over the past several decades several classic digital reverb units have become staples for professional mixing engineers, and VerbSuite Classics brings you ALL OF THEM.

VerbSuite Classics is a partnership with LiquidSonics, and uses proprietary FUSION IR processing to capture the evolving and modulating characteristics of the modeled hardware reverb tone. In blind comparisons, users could not differentiate between the real hardware reverb patch and the VerbSuite capture.

FG-3000 & 3500 EXPANSION PACK
The FG-3000 and FG-3500 Expansion for VerbSuite Classics adds another two legendary digital reverb boxes to the Slate Digital arsenal including 40 new reverb patches that use LiquidSonics Fusion Capture technology.
The 3000 and 3500 are iconic studio effects that have appeared on too many hits to name. Their unique rooms, plates, halls, and special effects will help add incredible space, dimension, and excitement to your mixes!

FG-224 & 224XL EXPANSION PACK
The original 224 digital reverb is arguably one of the most legendary digital reverbs in history, gracing thousands of hit records mixed by some of the top engineers in the business. This new FG-224 and 224XL expansion pack for VerbSuite Classics features full Fusion Captures of both the original 224 and the even more acclaimed 224XL units, and it sounds absolutely incredible! These additional reverbs give VerbSuite Classics even more power and flexibility, and give you more creative tools to add width and depth in your mixes.

FG-BM7
The BM7 reverb model is a free expansion for VerbSuite Classics. It’s available directly from LiquidSonics using public-domain Bricasti M7 Fusion-IRs, which capture what many say is the best-sounding digital reverb in the history of audio production. Unlike several static impulse response packs taken from this famous unit, the VerbSuite Classics Fusion-IR expansion pack recreates the true tone and character of the unit’s modulation.