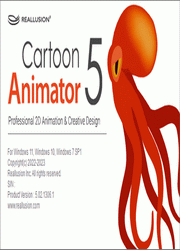 ANY GRAPHIC OR IMAGE CAN BE ANIMATED
Creativity is no longer limited: Whether vector or bitmap, any image can be imported, rigged and animated in Cartoon Animator.

CREATE ENGAGING SECONDARY ACTIONS
What took months of animation training to learn and hours of curve editing to achieve, secondary motion can now be done automatically. Applicable to any object, Cartoon Animator makes secondary motion a cinch to work with.

- Replace existing file with the provided one under bin64 folder. Merge the reg entry.

* Use a firewall software to block incoming and outgoing to program, if not properly blocked it will immediately quit saying invalid serial.

* If you don't want to deal with firewall etc.. Simply go offline before launching the software. There's no another way I know of.

- Do NOT go online or attempt to update it. You will lose the working copy.