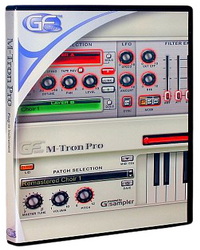 GForce M-Tron Pro - it is an imitation of the legendary, vintage instrument like a mellotron, developed in the early 60-ies of XX century. Mellotrons sound production is due to compounds each instrument keys with tape transport mechanism which causes the tape to move. On the tape, respectively, recorded the sound of the corresponding note.

Mellotron can assume one of the first, if not the first sampler. Hardware mellotron extremely capricious and unreliable tool to constantly deteriorating sound quality. Deterioration in the quality of sound digital library fortunately not threatened and it will allow you to recreate the sounds of this legendary tool on your computer. The M-Tron sound library includes a variety of tools, not just the usual "string" Mellotron sounds.
The tool was used The Beatles, Yes, Led Zeppelin and The Moody Blues.

Use included Keygen to generate a Serial
back to top